When you operate a MLM or network marketing business, you know that more exposure increases your odds of finding your next customer or team member. So today, I am going to share with you how I can use a simple tweet along with a few steps, and increase my leads for my MLM business.

If you know of the platform called Twitter, and have an account there, then you have what it takes to perform this simple strategy. It doesn’t matter how many followers you have either, but the more you do have, the more all strategies on Twitter become more effective. So, with that said, let’s learn the 10 simple steps to get more exposure for your MLM business, using a single tweet.

This is your profile. Make sure you include your link to your landing page you use to convert visitors into leads. If you do not have a landing page (also known as a capture or squeeze page) then do consider getting one. These will greatly increase your results as you can follow up with any visitors who have reason, or interest to use your product.

Also, be sure to watch the video included at the bottom of this post to learn more on getting your profile properly built. This will prove helpful in using Twitter in general.

Now you have your profile set up for visitors to be converted into leads, so you need a tweet. In order to get the best results from a tweet, you want to create a sentence or two that really explains to the reader what they are going to get from clicking the link in the tweet.

You can use questions, problems, or concerns in your tweet, and grab the attention of those who face these issues. A good example would be someone looking to sell weight loss products, and mention a particular health issue that someone may suffer from, that the product they offer can help with. This is typical good marketing skills, and you want to use them in your tweet.

The more your tweet seems personally written for the reader, the more the odds of getting a click, visitor, lead and sale. So this part will be different for everyone, but you can get more info on this step in the video at the bottom of this blog post.

Hashtags are super important because these are what help others find your tweets on Twitter. You want to create about 2 or 3 hashtags in your tweet, and make sure they are the actual substance to the tweet.

An example would be using hashtags such as “#mlm” if your tweet was regarding joining a MLM business such as yours. There are several hashtags going around Twitter, and finding the more popular ones can increase your views of random individuals. You can get a list of trending hashtags on Twitter, but only the tops ones. For me, I will use many of the same ones, as they pertain to the same crowd I usually target in my tweets.

Always be sure to include hashtags in any tweet you want to get more traffic, clicks, and sales from. You can learn more on hashtags and how they work in the video at the bottom of this blog post.

Step 4: Include Images Or Videos

If you really want to get the highest possible amount of traffic from a single tweet, you must include an image or video to grab the attention of Twitter users. A simple text only tweet is better then nothing, but include an image to it, and the clicks increase to.

The reason you want an image or video, is to stand out more. Now, most people include these, so the text only tweets get covered up. So including an image that really can grab attention, or interest someone enough to read the tweet is key. It’s not possible to tell what the image should be as everyone has different products and services. So this step is left to your own imagination, just be sure to include it.

Videos included into tweets can increase your view count on Youtube, and even be watched right from Twitter. So if you are also into video marketing, tweeting your video will be very helpful using this strategy, or in general when tweeting.

Now we want to make sure a particular tweet gets as much exposure as possible, to drive traffic to your MLM business. So, you need to decide if this tweet you are creating is a most important tweet, and if so, pin it to the top of your Twitter profile.

Pinning it to the top means that this tweet we are creating, will always remain as the first tweet someone sees when they visit your profile. Kind of goes hand in hand with Step 1. It’s only for those who visit your profile, so it can bring in traffic for many moons to come, as long as you are actively participating on Twitter.

To pin your video to the top, you can see the steps to do so in the video below. Most people know how to do this, or know how to figure it out. But I still explain it in the video for the new people coming into the MLM industry or Twitter.

Here is a step a lot of people do not use, and are not aware of. But this step is useful when you have a smaller following, or just want a single tweet to get as much exposure as possible.

This is where we go to a website called FollowLike.net and load our new published tweet. Here we can get several other people from all over the globe to tweet it on their Twitter accounts, and even retweet the one we pinned and are promoting.

There are ups and downs to this step, so if you use it, be sure to know them. The good thing is more people are going to see the tweet. If we include good hashtags, and a great image or video, it simply puts the link out there more. Also, the amount of likes and retweets we get will help more people see our link in the tweet more. It may not increase the followers very much, but those too will come from the re-tweets it gets.

The downside is the people sharing the tweet, may not have large followings, or can remove them if they so chose later down the road. Also, there is a lot of traffic from all over the globe, meaning this will pull in leads from areas where the signup rate is not possible or many people can’t afford to purchase. This comes with the step if you chose to use it. I still use it for specific tweets because it will pull in directly a few leads that are good, and the poor quality leads, well those just happen.

The final point, it will increase the popularity of your tweet, and you can use followlike.net and other platforms similar to it if you chose to. This will take anyone’s tweet and over time make it one with several thousands retweets and likes. And of course, see the video below to watch me load a tweet to this platform.

If your tweet is one you really want targeted traffic to see quickly, or you want to really focus on getting as much possible traffic from it as you can, then you can also sponsor it on Twitter.

This is a form of advertising you can pay for, and Twitter will promote your tweet out to more people. Making sure it gets seen by more, and helping you to get more traffic.

Twitter offers several forms of advertising, so you can find what will be best for you if you are going to advertise on Twitter. But if the goal is to get one particular tweet to pull in massive results, sponsoring the tweet is the way I would go about it.

Keep in mind, Twitter can and may, at anytime, cancel your ads account. I had my Twitter ads cancelled by Twitter, even though I was not using it. I got an email from them saying I violated their terms, but I had not ran any Tweets in years at this time. So there can be for any reason, a discontinuing of your paid advertising on Twitter, so don’t get too upset if this happens to you.

I am sure Twitter does not look happily upon MLM and any type of business that is a home based type. So be careful in your wording and study up on their terms before requesting your tweet to be sponsored or promoted by them.

Bonus Strategy: Is It Just The Tweet You Want Promoted?

Let’s be real, you only want your tweet to do well, so the link in it can drive traffic to your offer. So, we have looked at 7 steps to really explode your single tweet, but now we want to hop into a really cool strategy to get more traffic to your link you promoted in the tweet.

By combining several steps, similar to what you seen above, you can really promote an offer or link. What you want to do, is promote the same link in your blog post, or a Linkedin article, then promote that piece of content through the tweet.

By doing this, you can include a video in your blog post or article, and then share it on Twitter. Then share the link to your blog post or article on Facebook, Google Plus, and Mix. After you have shared the piece of content on all the social media sites you have accounts with, you can now create a tweet for each of those pieces. By doing this you can really increase traffic to the offers since each new link created from each share, can be tweeted out in the social sharing platforms as well.

Also, if you do include a video, you can share the video from Youtube onto Twitter, and other platforms. So now you have links specific to the video you placed in your content. This creates a whole new piece of content to promote, by sharing it on all the platforms, and those too can all be tweeted out in individual links.

To grasp your head around this massive traffic generating strategy, you will want to watch the video below. Towards the end of it I will explain and show you the basic concept of how to do this. It is a lot of work, but if you want to get a lot of traffic, leads and sales, the work is going to be needed.

no time to generate your own leads? have them generated for you, for life

If you got value from this, or got some new ideas to help push your tweets across the web, then please be sure to leave a comment below. I appreciate all comments, and love to hear back from those who have read this post.

Also, if you are wanting to build your MLM business using several lead generating strategies, be sure to pick up my “20 Ways To Get Leads” eBook found right here on my blog.

P.S Want to have me build a downline for you? Take this free tour here, and I will personally build a team of paying customers that you too can participate with and earn from. It’s fast, free, and gives you an inside look so you can decide. 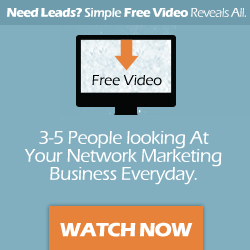